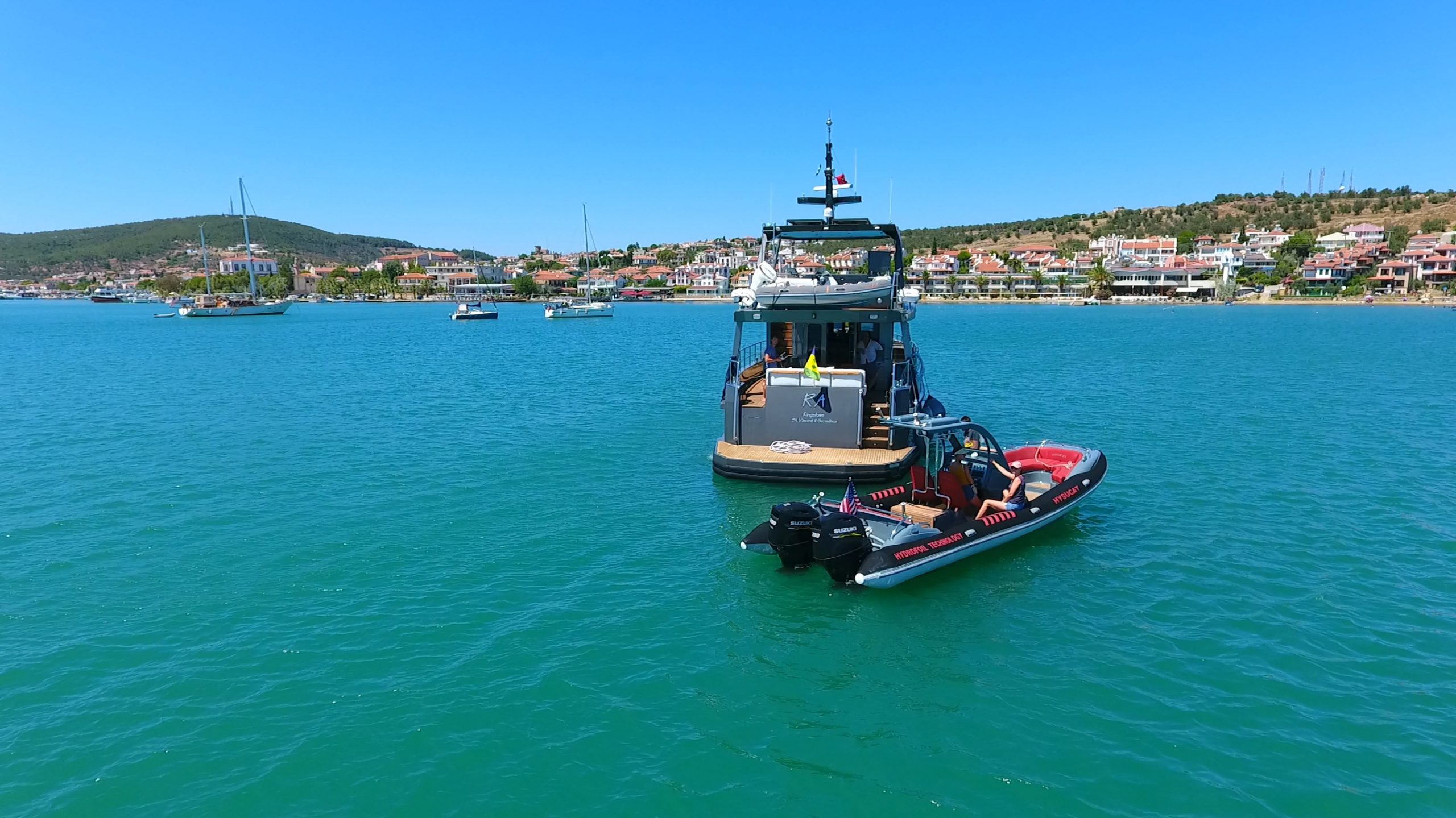 On August 2, the Bering Yachts’ expedition arrived at Izmir. This means that the trip that started on July 28 in Kemer has almost reached its furthest point. Having passed more than 430 miles in 5 days, Bering70 has only one point left before the voyage will turn back to the south. Nevertheless, before that the third largest Turkish city has to be explored.

The Ku?adas? – ?zmir leg is also one of the longest in the Bering70’s voyage – 110 miles. To cover that distance the yacht travelled for 14 hours at average speed on 7.5 knots. The pair of Cummins 350 HP engines consumed around 225 l of fuel. Again, as it was on the night before, the sea was heavy, but everything was relatively quiet onboard thanks for gyroscopic stabilizer.

Bering70 arrived to vicinity of Izmir harbor at 10.30 in the morning and impatient crew decided to use Hysucat hydrofoiling RIB to reach quickly the shore while the yacht continued its progress to the designated anchorage. There were definitely much to explore and discover.

The ancient and yet very modern city of Izmir considered to be the most “liberal” or west-styled in Turkey. It is no surprise as for ages Smirna (the Greek name of the city) was predominantly Christian and one of the largest ports for all periods of its long history. Ruled by Ionians, Persians, Alexander the Great, Romans and Genova, the city was always in the heart of trade and cultural exchange. Even under Ottoman and Turkish rule, when Christianity gave way to Islam, the city haven’t lost its importance. The recent refugee crisis has reminded of that as well as of ancient times when the whole nations were moving and disappearing but not the city.

At the evening, the city’s waterfront starts to shine as multiple skyscrapers lit its lights. This is the right time to stroll around Alsancak district to find some crowded (or quiet as you wish) place for perfect local (or European) dinner. In addition, this is the only city on the current Bering70’s route that has a large bazar. Worth a visit indeed. ­

Another long day is done. So what’s next? At the night, Bering70 started its engines pointing towards Ayval?k village that lies some 70 miles to NW of Izmir.